Advances in technology have enabled the option to become more data-driven, with results often available in a matter of milliseconds.  Watches rarely just tell time, smartphones can track your every move, and even pedometers often reveal more than step count.  Step counters have become so popular that even large companies have incorporated challenges based on step count, in hopes of encouraging workers to invest time in a healthier lifestyle.  What exactly is the recommended number of steps to aim for each day, and does that number actually matter?

The universal goal around step count is to aim for 10,000 steps per day.  Where did this recommendation even originate?  Prior to the 1964 Olympic Games in Tokyo, there was a marketing campaign for a product called Manpo-kei, a pedometer, that was inspired by an increased focus on health and fitness within the Japanese population.  In Japanese, “man” means 10,000, “po” means steps, and “kei” means meter.  A surge of walking clubs sprung up around Japan, encouraged by the idea that an activity involving minimal equipment without the need for specific training could help fight obesity, which was starting to become an epidemic.  The “rule of thumb” of 10,000 steps per day not only stuck, but it also spread across the world. 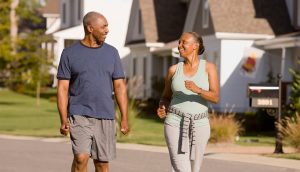 Is there science behind the seemingly arbitrary goal of 10,000 steps per day?  From 2005-2006, a study was conducted by Ghent University in Belgium and the University of Queensland in Brisbane, Australia, aiming to determine whether 10,000 steps improved the health of the participant.  Of the 866 participants enrolled, half successfully completed the study and did report improved health and overall wellbeing.  However, when the study was conducted again four years later, participants were unable to achieve step count.  Despite showing health benefits, 10,000 steps per day may not be a realistic and habitual goal for all.

In the new data-driven tech world, what guidance, if any, is there to follow?  Concerning step count, perhaps there is not a one-size-fits-all answer.  On average, healthy Americans get anywhere from 4,000 to 18,000 steps per day, with some areas of the population getting closer to just 3,000 steps.  The concept of a graduated step index for healthy adults was introduced in 2004 by Tudor-Locke and Basset, which was revised in 2009 as:

Still, even with these classifications, few studies have been conducted to evaluate health at different steps/day goals.  Some behavior modification programs have suggested an increase of 2,000 to 2,500 steps/day above baseline and have seen positive outcomes in terms of blood pressure and weight loss; yet, it is still premature to recommend a specific step-based goal.  The important takeaway is that a mere increase in activity is beneficial and working toward any goal is better than none.  Even more important than an actual goal may be the intensity of the walking activity.  A systematic review of 31 articles suggests a step cadence of 100 steps/minute necessary to achieve moderate physical activity. 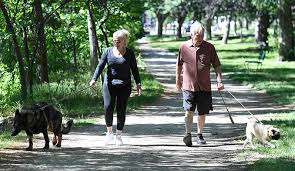 No matter your personal step goal, it is best to follow public health guidelines regarding weekly physical activity.  Walking is a great way to add physical activity, and even small increments of just 10 minutes count.  Some easy ways to rack up the steps include: taking the dog for a walk, taking the stairs, parking farther away, scheduling walk breaks during the workday, going for a walk if you arrive early to an appointment, and finding a walking buddy or family member to step it up with you.

Get your free ebook now!

Enter your info below so we can send you...